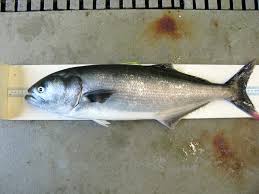 The bluefish is something of a misnomer, as this species is most commonly a sea-green color above, fading into a silvery shade on its lower sides and belly. Bluefish are common to both the American and European-African coasts of the Atlantic Ocean. Along the western Atlantic they are abundant from Argentina to Cape Cod and are occasionally found as far north as Nova Scotia. Both male and female bluefish reach sexual maturity by years old.

No closed season.  (15 fish per person, no minimum size)

Bluefish rarely exceed 20 pounds and 40 inches length. Any Bluefish over 10 lbs. is considered large. Snapper Bluefish (less than 12 inches) are the young of the year fish and are caught in bays and tributaries in August in New Jersey.

Young of year Bluefish (Snappers) eat a variety of small-bodied animals such as shrimp, small lobsters, crabs, larvae fish and sea worms. Adult bluefish are opportunistic feeders, commonly focusing upon schooling species such as menhaden (bunker), squid, sand eels, herring, mackerel, butterfish and rainfish. Bluefish generally feed in schools, actively pursuing prey in tidal rips or in inshore shallows where food in easier to catch. The feeding behaviour of this aggressive brute is legendary! Bluefish are known to dash wildly about within schools of prey species, biting, crippling and killing numerous small fish that do not get eaten. They frequently drive schools of prey species into shallow inshore areas where it becomes easier to cripple or catch fish that are trying to escape.

are a must in order to prevent fish from cutting the line with its sharp teeth. Anglers use a variety of plugs

, squid like or mackerel like lures when casting or trolling. Bunker, mackerel or eels are the preferred live baits. When these are not available, many types of cut bait also do well. Chumming is effective in drawing fish to the boat.

Bluefish along the New Jersey coast spawn between June and August. Spawning occurs primarily offshore, over the continental shelf when water temperatures warm to between 64 and 72 degrees. After hatching, larvae inhabit surface waters and are swept along the continental shelf by prevailing currents. The number of eggs produced by females is related to their size. A 21 - inch female produces about 900,000 eggs while a 23 - inch female produces about 1,100,000 eggs per year.

Bluefish inhabit both inshore and offshore areas of coastal regions, with the young fish (first year) called "snappers" often frequent bays and river mouths. This species normally travel in large schools which may contain up to several thousand fish. Bluefish display an annual migration pattern that is keyed to the seasonal warming and cooling of coastal waters. Larger fish initially inhabit deeper waters but move progressively shoreward into shallow areas as the summer progresses. Although many adult fish migrate southward during the fall their majority migratory movement appears to be offshore toward the warmer deep waters of the continental shelf.

With most fish, the quality of the flesh and thus the flavour, will be best if the bluefish is bled, gutted and iced as soon as possible after capture.

Bluefish fillets can be marinated

in acidic foods such as vinegar, lemon or lime juices, or wine, or they can be cooked with fresh vegetables such as tomatoes and onions. These methods will lighten the flavor as well as retain the oils that confer the full healthy benefits associated with eating fish. Smaller bluefish (under 6 lbs) are considered much better eating than the larger fish. Also, many feel that the "spring run" of fish are better tasting than those caught at the end of the season in the fall. This is attributed to the sweetening of the meet due to a diet high in shrimp early in the year.