Read the latest on NJ Fluke Regulations for 2021 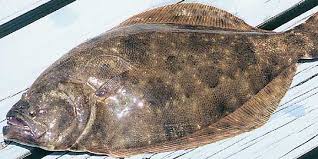 The summer flounder, or "fluke," a flatfish is found in coastal waters from Florida to Maine. Like other flatfish, the fluke has both eyes on one side of its head and rests on the ocean floor on its side. The fluke is called a "left handed" fish because its eyes are on the upper surface of the head when the fish is facing left. Summer flounder behave as the chameleons of the sea. They have the ability to change color to match the bottom on which they rest. Generally they are white below and dark above, but they can turn various shades of gray, blue, green/orange and almost black.

It is Possible to catch Fluke in NJ waters from April - November.

*2021  Regulations were approved by the NJ Marine Fisheries Management Council .

Summer Flounder over 10 lbs. are consider "Doormats" and are rare, though it is believed the true upper end in size is somewhere around 25 lbs and live for 20 years (females). Males rarely exceed 7 years of age and 3 to 5 pounds in weight. Most Fluke are much smaller with most fish caught by fisherman being "shorts" somewhere between 14" - 17".

The summer flounder, which depends upon sight to capture its food, feeds most actively during daylight hours. Juveniles feed upon small shrimp and other crustaceans, while adults eat a variety of fish, including small winter flounder, menhaden, sand lance, red hake, silversides, bluefish, weakfish and mummichogs, as well as invertebrates such as blue crabs, squid, sand shrimp, opossum shrimp and mollusks. Adults are very active predators, often chasing schools of small fish to the surface and leaping out of the water in pursuit of them. This behavior clearly distinguishes the summer flounder from other more sluggish species of inshore flatfish.  In addition to live and other natural baits Gulp! are considered a 'Must Have' among experience Fluke Fishermen.

By far, the best Gulp

bait for flounder are Swimming Mullet

.  The curly tail action drives Fluke wild and will put them in your cooler.

Fluke are well known for the aggressive "head shake" battle when hooked. They offer a particular challenge on light tackle. Average sized fluke, weigh about 2 to 4 pounds, while the aptly named "doormats" weigh 10 or more pounds and provide memories for the angler lucky enough to hook one. Summer flounder can be found on sandy or muddy bottoms in many inshore habitats and are particularly abundant in fast moving rips that gather debris and bait fish. It is possible to troll, chum, and cast for fluke, but the most popular method is drifting bait along the bottom. When drifting, the bail of the reel should be open and the line held by the finger. Once the line stops drifting and it tugged, it should run free for a moment to let the fish get the bait in its mouth before the hook is set.

Click here to see our favorite Fluke rods for 2017


Strip baits are necessary. These baits should be at most 1.5 inches wide at the top and at least 4 or 5 inches long. The bait should be cut with an inward taper so that the tail of the bait is more narrow than the head of the bait. This will give the bait a flutter action that Fluke simply can not resist. Squid is a staple to be used as strip baits, but many other choices exist. My ALL TIME favorite is fresh sea robin. Most fisherman combine the strip bait with an additional "meat" bait such as spearing, minnow, smelt, etc.

typically consist of a sinker holder with a long lead hook.  The hook may be skirted or not.  Best color varies day by day but make sure you always have white and chartreuse on hand.   What is the best fluke rig?  Opinions vary but not many would argue that a 2 bucktail jig

with a small bucktail for the top (teaser) and a heavier bucktail below is an awesome combination.

Both males and females become sexually mature at the age of 3. The numbers of eggs produced in a spawning season increases with females size and weight. A 14 inch female produces about 460,000, and a 27 inch female about 4,200,000 eggs in a season. Reproduction takes place in the fall, as soon as the fish begin migrating to wintering grounds. Peak spawning activity occurs from early September through early November in water temperatures of 53 to 66 degrees F and at depths of 60 to 160 feet. The center of spawning activity occurs off the coasts of New Jersey and New York and some in southern New England waters. The eggs float in the water column, hatching 3 days after being laid.

Summer flounder inhabit inshore areas during the warmer periods of the year. Fluke prefer eel grass beds, mussel beds, reefs, etc. because of the protection they offer. In the summer, small and medium sized adults are found on the sandy and muddy bottoms of bays, rivers and along the open coastline. Most of the larger fish tend to stay in somewhat deeper water (55 to 80 feet). With the approach of fall, fluke migrate offshore to water depths from 150 to more than 500 feet.

Fluke should be iced immediately after capture. It is not necessary to bleed the fish. If they are iced in a cooler the melt water should be drained as needed so the fish do not soak in warming water.

The white flaky meat of the summer flounder is highly rated due to its delicate flavor and texture. This versatile fish provides delightful dining when steamed, poached, baked, broiled, sauteed, fried or microwaved. Large "door mats" can be quarter filleted for most recipes or cut into steaks and grilled over charcoal or gas.