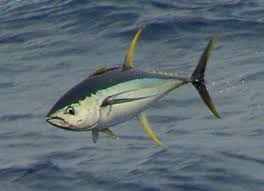 Yellowfin reproduce by a method called “broadcast spawning”. This means male and females release their eggs and sperm into the same water column for external fertilization. This method promotes fertilization while also curtailing egg predators. They start out as microscopic larvae, and within two years are sexually mature at three feet long. Yellowfin mainly inhabit offshore waters at various depths. They travel in schools once they are mature, and have been observed swimming with other species.

Yellowfin Tuna are strong, fast swimmers. Like sharks, they must maintain movement to breathe. Their size and speed makes them excellent predators. Because of their drastic lifecycle, Yellowfin eat almost anything. They can maintain a body temperature above the temperature of the surrounding water. This allows them to swim faster, giving them an advantage in colder waters. Yellowfin are a highly sought after gamefish. However, because of fisheries, their conservation status is only near threatened.

The Bluefin Tuna is a member of the Scombridae family, and has a scientific name of Thunnus Thynus. They are one of the largest bony fish in the sea, averaging 6.5 feet and 500-plus lbs., though larger Bluefin are common. They have a robust frame and cone shaped head with a large mouth opening. The top of their body is a metallic blue, and the bottom is a silver-white color. Their caudal fins are a bright yellow, and their pectoral fins are distinctive in their shortness. Their eyes do not bulge out like other fish, creating an extensively streamlined figure.

The Atlantic Bluefin spawn in two general areas: Western Mediterranean and Gulf of Mexico. They spawn in large groups, which puts them at risk of commercial fishing. They reach their sexual maturity between ages eight and twelve, and spawn only once a year. Bluefin can produce up to ten million eggs. However, only a fraction of these eggs will make it to adulthood. This too puts the species at risk.

Like Yellowfin Tuna, Bluefin start out incredibly small. Because of their drastic bodily changes, Bluefin are constantly eating. They feed on smaller fish, squid, and crustaceans. Bluefin have a higher body temperature than the surrounding water, which aids in their hunting in colder waters. They are constantly moving, passing water over their gills to breathe.

As mentioned, their habits make them susceptible to overfishing, and their meat is a delicacy even raw. Their conservation status is listed as endangered.

The Bigeye Tuna, Thunnus Obesus, is a highly migratory fish found in open waters. In Hawaiian, it is one of two tuna species known as “Ahi”. Bigeye can grow up to eight feet in length, and weigh over 400 pounds. They have large streamlined bodies, and faithful to their name, big eyes. Their eyes have developed large spherical lenses that permit vision in lower lighted areas. The coloring on the top of their body is blue, and their underside is near white.

Bigeyes reach maturity around two to four years and spawn in June and July. These Tuna can live to a maximum age of sixteen years. They are known for their vertical behaviors in the water. At dawn they swim to much deeper, cooler waters, and then swim back to shallow waters in the evening. This process is known as “diel vertical migration”. It helps the tuna, and other fish, regulate their temperatures, conserve energy, and/or digest food. Bigeyes diets consist of squid, crustaceans, sardines, and other small deep water species.

Albacore Tuna have a scientific name of Thunnus Alalunga. They have a bullet-shaped, streamlined body. Their nose resembles a cone, and is accompanied by a large mouth and large eyes. Their backs are dark blue, with a lighter blue-gray side and belly. Their distinctive feature is elongated pectoral fins that run along their sides.

The Albacore Tuna spawn around age five by releasing their gametes into open water. The fertilization process takes place externally and rapidly. The Tuna grow quickly at first, then slow down later in life. Their life expectancy is around 12 years, and they can average 4.5 feet in length and 100 lbs in weight.

These Tuna eat a variety of fish and crustaceans, with cephalopods being their primary source of food. Albacore hunt and live in open waters. They are a powerful Tuna, and hit their prey with great force. Multiple regional fishery managements manage their species, and at the moment their conservation status is considered not threatened.