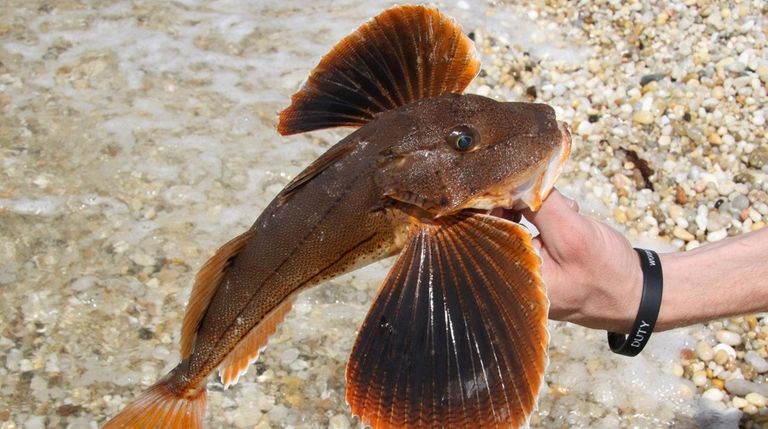 The sea robin is also commonly known as the gurnard, and is a member of the Triglidae family that is exclusively made up of bottom-dwelling fish. In the waters of the Atlantic Ocean off the coast of New Jersey these fish are referred to as northern sea robin or common sea robin. They can be found along the full length of the state’s coastal harbors and inlets that flow around New Jersey, ranging in the north from Sandy Hook and wraps around the southern coast into the Delaware Bay.

Sea robins are known to make a croaking sound similar to that of a frog when disturbed, especially when hooked and out of water. Sea robins are an unusual fish in that they have smaller leg-like fins that sprout from the underside of the fish and allow the animal to ‘walk’ across the bottom. Along with these fleshy ‘legs’, are two pectoral fins that jut out from the flanks and one top fin, which grants the northern sea robin the ability to make quick escapes from danger while also allowing these bottom-dwellers to turn up debris across the sea floor in search of food. The coloration of the sea robin is made up of dull reds, oranges, and browns that assists them in adequately blending in with the murky ocean floor just off the shore. The sea robin’s top fin also carries spiked barbs on the very edge to dissuade potential predators from above.

Northern sea robins are considered a stable species along much of the range they inhabit throughout the Atlantic coast, and do not have a defined major predator aside from humans. There is no commercial market with a high demand for sea robins and many fishermen chase the bottom-dwellers for the pure enjoyment of angling.

Although seldom sought after for eating, northern sea robins are in-fact edible when properly prepared and are considered one of the more delectable of the bottom-dwelling fish species.

The northern sea robins found along the New Jersey coast commonly grow to between 12 and 18 inches long when fully matured.

Juvenile sea robins are consistently well below 12 inches in length and are a popular bait for much larger fish species such as bluefish and even shark by cutting the smaller sea robins into bait-worthy strips.

Being bottom-dwelling fish, the sea robin can eat most small fish, crabs, and shrimp commonly found along the sea floor, and are known among anglers as a notorious bait stealer when fishing for other species. An appropriate bait for catching sea robin could be any live bait or artificial lure used for active gamefish in New Jersey.

The best time to fish for northern sea robin is between the warmer months between May and October. During the colder winter months these bottom-dwelling fish move out past the continental shelf into deeper water.

Due to the sea robin spending almost its entire life on the bottom of the ocean, it is crucial to weigh your line down so that it reaches the sea robins habitat. These are not fish that will look upward to find a tasty lure, but keep their sightline down to scoop up shellfish and scavenge the sea floor. A stronger line is highly recommended due to the overall strength of the northern sea robin when hooked. Time and patience are also needed to reel one in.

Set the line just wait for a sea robin to grab hold!

The spawning season for northern sea robin occurs from spring and well into summer, with females of the species preferring to lay eggs in sandy patches of ocean floor throughout coastal inlets. Once fertilized by male sea robins, the eggs hatch within 60 hours and begin their lives without the aid of either parent.

Northern sea robins commonly take up habitats around the harbors and inlets throughout eastern Atlantic coastal waterways from Bar Harbor, Maine and stretching down to Cape Hatteras in the Outer Banks of North Carolina.

Specific to New Jersey, the sea robin is well known to the Garden State’s harbors opposite of New York City and reaching down into the coastal inlets of most coastal shore towns. These fascinating fish have also been found throughout the Delaware Bay and even right up to the mouth of the Delaware River which gaps industrial shipping sites between southern New Jersey and northern Delaware in moderately shallow waters.